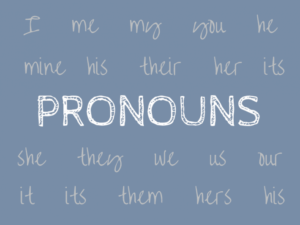 Pronouns make up a small subcategory of nouns.

The distinguishing characteristic of pronouns is that they can be substituted for other nouns.

Personal Pronouns (I, you, he, she, it, we, they, who) often replace nouns representing peoople and they can change depending on their role in the sentence ( like she becoming her etc.)

We would love for you to join us at the party.

Demonstrative Pronouns are used to point out specific things:

This is the book I left in the class. = this as specific item.

Should I take those? = those as specific items.

Indefinite Prounouns (all, some, any, several, anyone, nobody,each, both, few, either, none, one) are used for non-specific things:

Everybody enjoyed the play.

Interrogative Pronouns (who, which, what, where, how) are used in questions:

What do you want for dinner?

Which train we have to take.

Who is going to do the shopping?

Possesive Pronouns (mine, yours, his, hers, its, ours, theirs, whose) are used to substitute nouns and show possession.

The green sweater is mine.

Relative Pronouns (which, that, who, whom, whose, when, where) are used to add more information to a sentence.

Whom – refers to a person (as the verb’s object)        He isn’t sure whom this notebook belongs to.

Reciprocal Pronouns (each other, one another) are used for actions or feelings that are reciprocated:

We give each other gifts during the holidays.

The children spent the afternoon kicking the ball to one another.

Reflexive Pronouns (myself, yourself, herself, himself, itself, ourselves, yourselves, themselves) end with self or selves and refers to another noun or pronoun in the sentence:

She was in a hurry, so she washed the car herself.